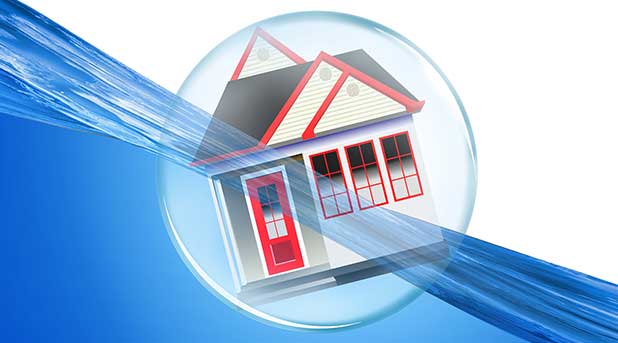 In a housing or real estate bubble, home prices inflate because of overly optimistic speculation that they will keep rising. When people can no longer afford to keep up, the bubble bursts. When the burst occurs, demand for homes decreases, often precipitously, while supply goes up. Home prices drop dramatically as a result.

Through much of the first decade of this millennia, certainly before 2008 when the effects of the burst bubble caused the greatest economic calamity since the Great Depression, home prices skyrocketed, fueled by overly optimistic speculation, with negligent and unsustainable lending standards at the height of that real estate bubble. Homes were overvalued according to most experts by 39%. An economic tsunami ensued, prices tanked, millions defaulted on their mortgages, the ensuing debacle again, the worst since the Great Depression.

Fast forward to the past couple years through today. Very mixed yet all credible opinions abound whether or not we are now facing another real estate bubble. For many experts, the recovery of this current half decade shows alarming signs of the coming crisis much as they did the last time.

By 2014, CNBC was reporting that the jump in home prices was seen to be such an upward trajectory as had been seen in the boom years immediately preceding the bubble burst. The indicators are very much the same, dramatic home price increases, soaring 7-12% year after year, unsustainable leaps all. Core Logic concurred, reporting that home prices actually increased, according to their data, equal, year to year, to the last boom at it’s height. The recovery, to many, just an illusion, just smoke and mirrors.

David Stockman, the former OMB Head under President Reagan sees a coming disaster with an unsustainable recovery. He sees the target buyers “the investors would need to sell to, have been staying out of the real estate market. Financial hardships, continued unemployment concerns, and other factors are keeping them on the sidelines.” The Nobel prize winning economist, Robert Shiller warned CNBC that the housing market could be in the early stages of a housing bubble. David Blitzer, Chairman of the Committee at S&P Dow Jones Indices agreed, noting the bubble can burst anytime through year 2018. No one knows for certain when but it will happen according to him.

According to a recent quarterly report of the National Association of Realtors ” strong year over price gains are starting to take a bite into housing affordability, with the real concern that incomes are not keeping pace with the rise in home prices. Without housing affordability, there cannot be a rise in first time buyer participation, without the entrance of first time buyers, those wishing to move up to a larger house or relocate to a more upscale neighborhood will not be able to do so.” A majority of Redfin’s real estate agents surveyed seem to believe that there is already a mini bubble brewing in a few cities and suggest many of the same features of the last real estate bubble are visible again. Rapidly rising home prices with home prices detached from incomes the leading features of concern. If home prices rise considerably faster than income, a bubble is likely.

The contrarians are reassuring, noting Americans are still in more housing debt than they were a decade ago, but are on more solid ground this time around. The last time, there were lots of listings and sales with home prices shooting to new highs, with both off the charts. However today, listings are scarce with standing inventories at record lows. According to Redfin, sales are up quite a bit but current levels are remaining on par with pre bubble averages. Moreover, today’s quality financing controls make a huge difference. Consumer protection is stronger than ever and strict lending standards are now the rule, not the exception.

At this moment, the answer to the question posed is no. The still hot housing market is still deemed to be the natural result of record low supply from price declines. The consensus remains that the recovery is not an illusion. What may be needed to avoid a bubble may be no more than a judicious injection of sound governmental policy that lets the market have it’s own natural correction.